This address is one of Manila’s most sought-after because of its high concentration of educational institutions, like the St. Paul University and the University of the Philippines, which are both walking distance from the condo project. There are more top-caliber schools in close proximity to your new home. Furthermore, there are various government and private offices surrounding the condo property. As the Manila is the national capital of the Philippines, the city is home to the official residence of the country’s president (Malacañang Palace) which is just a few kilometers away from the site. That is why you can be assured of utmost security even outside of your home.

Manila is the Philippines’ capital, one of the world’s oldest cities, and home of the country’s several historical sites. The city also hosts various cultural centers, museums, shopping havens, entertainment centers, leisure spots, prime educational institutions, business centers, and other modern establishments. The city is rich in modern and old diversities where some of the best nightlife outlets and various tourist destinations are easily accessible. The city is serviced by varied mode of transport (such as trains, buses, jeepneys, taxis, and UV Expresses).

The Sky Arts Manila is quite interesting to live into. Its modern contemporary building design blends with some of the city’s famous and modern landmarks; as well as the aesthetic aspect of the towers. The Sky Arts has an endless beauty and priceless aesthetic pleasures that will make your investment more low-risk. Owning a unit at this amazing property is one of the surefire ways of owning a piece of rustic Manila.

Furthermore, even your kids will love spending their whole life in this progressive city as long as they live at the Sky Arts Manila. Aside from the St. Paul University and the University of the Philippines, there are still numerous premiere schools near Sky Arts where your children can choose to study. Some of these schools include the De La Salle University Taft, De La Salle College of St. Benilde, Philippine Christian University, and the Philippine Women’s University.

Your family’s medical needs are also not compromised once you settled on this condo community. There are several hospitals surrounding the property and can be reached within minutes. These hospitals include the Philippine General Hospital, Ospital ng Maynila, SuperCare Medical Services, Inc., Manila Doctors Hospital, St. Luke’s Medical Center Extension Clinic (at J. Bocobo St.), and the ManilaMed Medical Center, to name just a few.

Some of the government institutions that are in close proximity from the Sky Arts Manila are the Supreme Court, Department of Justice, NBI, Philippine Racing Club, and the Casino Filipino, among others.

To complete your weekend shopping, you don’t have to go too far from home. The Sky Arts offers easy access to more shopping complexes as Gen. Malvar St. links to major thoroughfares in Manila. Some of the closest shopping havens from your new home include SM City Manila, Robinsons Place Manila, EGI Mall Taft, SM Mall of Asia (MOA), Harrison Plaza, the Divisoria Market, and Baclaran Market, among others. 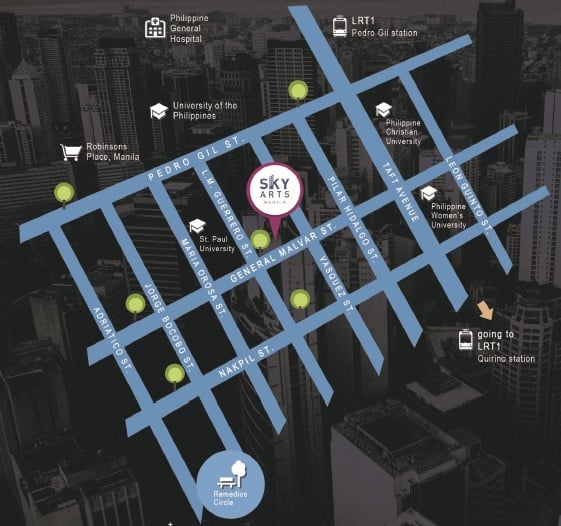